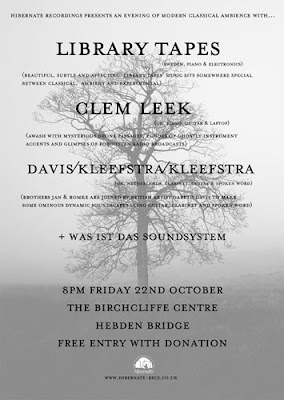 Around in Stoke Newington or Hebden Bridge this week? If yes, don't consider missing Friesian expressionists Jan & Romke Kleefstra live with Gareth Davis (plus Library Tapes & Clem Leek, in Hebden's alluring case...).
LMYE caught the trio aboard the good ship Boat-ting on Monday. The evening's great surges in the Thames underscored their intensely poetic summoning of landscape & memory - made even moving by being largely improvised & with Jan unveiling a seemingly more performed, repetitive approach to recitation in the absence of drones to "float" his affecting voice on. 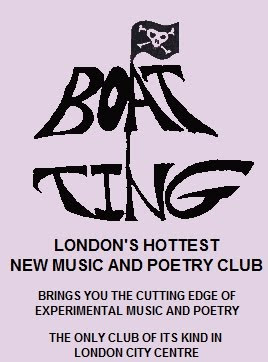 Also, hear Experimedia's preview of the exceptional Wurdskrieme by the brothers' "experimental supergroup" Piiptsjilling with Machinefabriek & soccer Committee.
Blurb: "On their second full-length, experimental supergroup Piiptsjilling set out to both deepen and roughen up the pastoral and peaceful sound of their 2008 debut release. A coherent unit formed by guitar & poetry duo Jan and Romke Kleefstra as well as Machinefabriek's Rutger Zuydervelt and Soccer Committee's Mariska Baars, the band delineate increasingly dark lyrical textures resonating with nocturnal atmospheres and tactile sound-operations on guitar, pedals and various looping devices. Building on patient and immersive improvisations and working with both sonorous drones and ghostly micronoises, "Wurdskrieme", which translates to "Cry of Words", moves at a dream-pace, substituting linear logic with a brushwood of metaphors and emotional abstractions. The underlying feeling of a subcutaneous tension is further accentuated by Jan Kleefstra's expressionist poetry delivered in the language of his native Friesland, a province in the far North of the Netherlands. Contrasting serene soundscapes like opener "Unkrud" with more tranquil moments featuring acoustic instrumentation ("Wurch"), the result spans up a sonic space that not only represents an evolution from their earlier work, but also takes them far beyond traditional categories and conventions."
Previous Kleefstra coverage (includes full stream of debut release). More here & here. 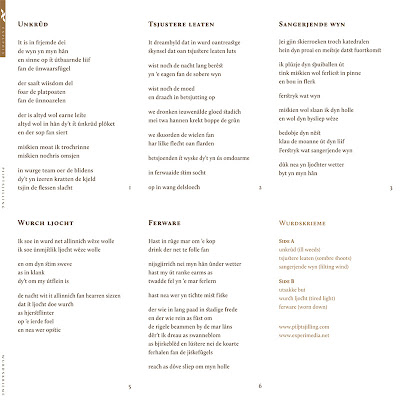 Important: LMYE only makes music available that artists/labels have chosen to share freely. Let us know if something here shouldn't be.
Posted by JL at 09:21 No comments: We are all broken - indisputably, Broken20_0.5 brings "drones, noise, clipped beats, rumbling bass". But to these ears what it most brings is a striking melding of protaganists TVO & Erstlaub into two sides of the same genre-defying, richly experimental & viscerally intense post-techno coin (appropriate image for a 3"...).
The two pieces bleed into each other in fascinating ways. Keep Away From Fire And Flames is the sound of a delicate drone infusion onto a notably restrained & modulated bed of skippy beats. Meanwhile, Entering The Eye Of The Storm squirts a faintly oriental, exuberant pipe* over a boldly slashing, clanking base unfamiliar from earlier Erst. *not a pipe really, just a sound somewhat like one...
The whole release is clearly also a kind of kissing cousin to TVO's prismatic epic We Can Remember It For You Wholesale, the inspired first official B20 release (extracts below). 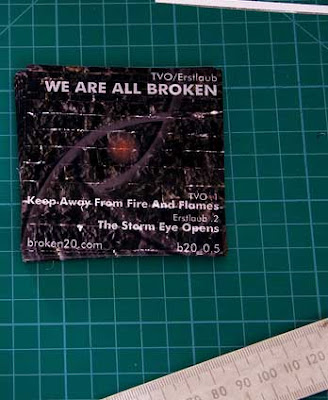 Separately, a new B20 artist: "Isodyne is a musician and dj from Edinburgh; he’s also recorded and worked under his own name, Patrick Walker, as well as AVX/Avionix and is perhaps best known currently for his work as half of Forward Strategy Group." 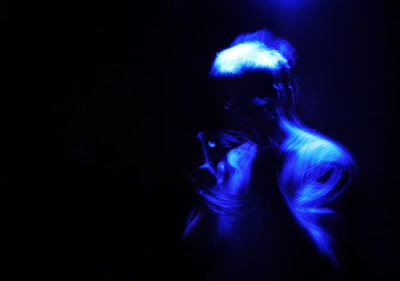 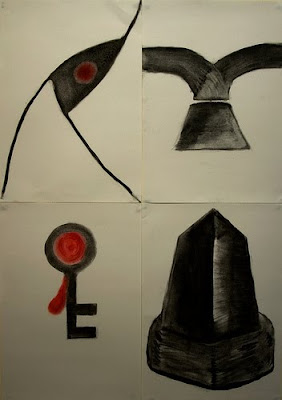 Important: LMYE only makes music available that artists/labels have chosen to share freely. Let us know if something here shouldn't be.
Posted by JL at 09:35 No comments:

End of an ear 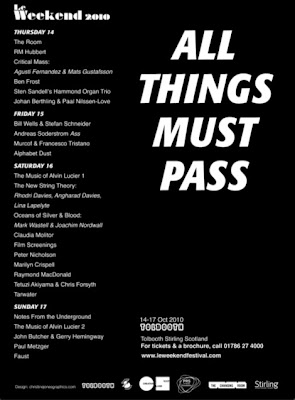 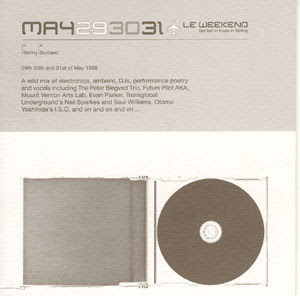 "All things must pass. The thirteenth Le Weekend will be an occasion of high drama and mighty celebrations. For thirteen years the festival has brought a mind boggling array of musical mayhem to Stirling and this year its last breath will be drawn on Sunday night. But like most beasts of bewildering spirit it is hoped that what Le Weekend started all these years ago will transmogrify into something new in the years ahead. Like the music that the festival has championed the idea of stasis, of not moving, is alien to the festival’s ethos, so to bring the festival to a conclusion now and on a high point seems the right thing to do.

Considering the significance of the year we have pushed the boat out to try and capture the essence of Le Weekend..." 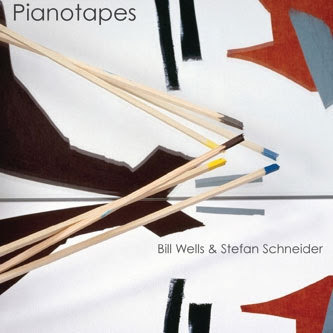 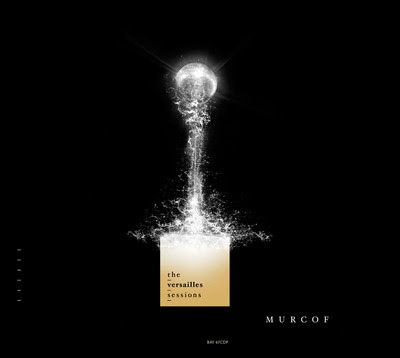 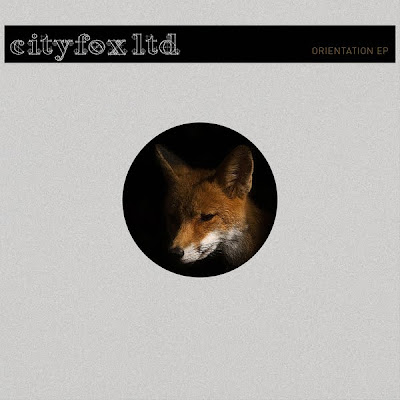 Important: LMYE only makes music available that artists/labels have chosen to share freely. Let us know if something here shouldn't be.
Posted by JL at 23:19 No comments: 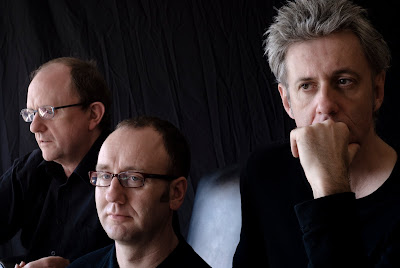 Let's talk about Necks, baby (ahem). Or rather, let's talk about Abrahams, Buck & Swanton.
When they’re not being the planet-bestriding, genre-destroying The Necks, do the trio's members, er, pull their necks in? Unequivocally, unsurprisingly not. Solo or in collaboration with non-Necks both prominent (Fennesz, Steinbruechel) & less so, they remain out there – sometimes further out than in their Necking, for that matter.
Only Swanton’s amiable world music-tinged catholics seem like a distinct step away from The Necks' intensity (would really like to hear his purer jazz with the Bernie McGann trio & quartet, though). 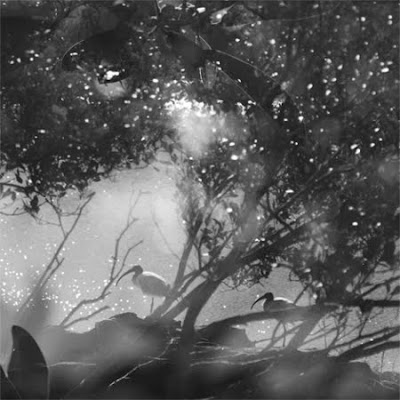 Of the other two, these ears get most from Abrahams in his non-Neck guise. His Play Scar is clearly one of this year’s key albums. Hear its opening track, the notably moving, wryly subversive vamp There He Reclined, via Spotify. Stream the dual-hinged jewel Jellycrown, with its abrupt change of attack (like Keith Jarrett kidnapped by art terrorists in mid-flow & shipped off to an early Philip Glass re-education camp), below.
Play Scar’s ambition, its challenges, its scrupulousness, its discomfort with its own beauty all demand garlands (try these & these, courtesy of mapsadaisical & The Milk Factory).
Abrahams’ earlier Thrown & Oceanic Feeling-Like (both on Room40 too, the latter with Mike Cooper) are outstanding too. Hear the rolling, counterpointing Remembrancer – late vaporous squirts & Casiotone buzzes somehow sharpening, not undercutting its lush, Necks-ish romanticism - & an extract from the exquisite, bucolic Sunset No2 duet with Cooper below.
Stream Play Scar & Oceanic Feeling - Like here (Spotify).
That's not even to mention his excellent Pedal piano duo with Simon James Philips - audio (two more tracks in the sidebar), also here, here & here.
Or his encounter with Steinbruechel... 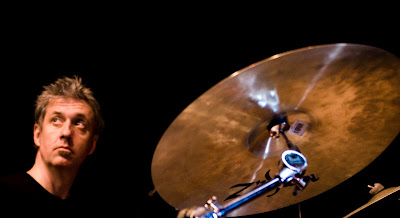 Buck’s extra-curricular work is similarly ambitious. Earlier this year he unleashed his own serious contender in the album of the year stakes, the dense, endearingly noisy Knoxville with Fennesz & David Daniell. Below, an edit of their Antonia (yes, the same one pretty widely circulated a couple of months back, but it’s still a fine piece…).
As well as underscoring how vital the venerable Thrill Jockey, like kranky, still is after all these years, it also reminds us – as Necks listeners hardly need reminding, but that doesn’t make it less true – of his huge part in shaping & driving The Necks. More of his recent taste for clanking temple bells & gongs would have added much to the FDB sound, though.
Buck's collaborative promiscuity probably extends the furthest & widest of the three. Can’t hope to capture it all here, but another of its evident highlights is Hear with Hannes Strobl & Toshimaru Nakamura. The clicky, loping extract from Piece 2 below is from the friendlier end of their often demanding spectrum.
Stream three Buck-featuring albums, including Hear's 5 Pieces, here (Spotify).
& then, because there's seemingly always more along the edge of The Necks, there's Hammeriver, which both Abrahams & Buck play in - alongside Clare Cooper & a cast of thousands (well, four others - one an Autistic Daughter - anyway...). 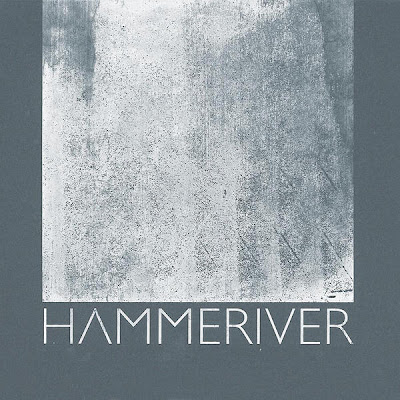 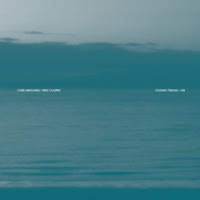 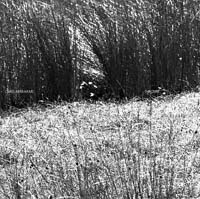 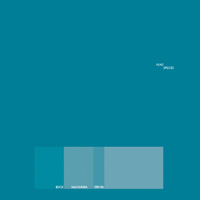 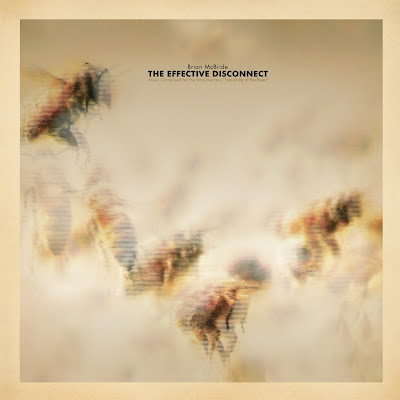 NB: edited re-up for of yesterday's post to get the track it was built around aggregated (26 others made it, but not the central, new one...). Apologies.
Typical. You wait years for an album of apiologically-oriented experimental ambient & suddenly, despite or conceivably because of Colony Collapse Disorder, two bumble through on near-matching flight paths - both outstanding & each enhancing their classic labels (see LMYE's 2009 pantheon)'s already strong years. With the blissy buzz of Koen Holtkamp's Gravity/Bees (Thrill Jockey; coverage) still reverberating, Brian McBride's ravishing, mournful The Effective Disconnect surfaces via the still firing - consider this year's output - kranky.
TED is from the soundtrack to the important documentary The Vanishing of the Bees (trailer below). You can still hear the serenity & hopefulness McBride aimed for originally. But the piece's fascination is in how these are entwined with & sometimes overcome by lament - appropriately, given the alarming subject. Although not one of the album's darkest moments, Supposed Essay below bears out this ambivalence.
Previous coverage (also here, here & here: BM & SoTL). Discogs (BM).
McBride: "When George and Maryam approached me to compose for their film they suggested I concentrate on four different themes: the gloriousness of the bees, the endurance and hardships of traditional beekeepers, pesticides and the holistic nature of non-industrial agriculture. I was especially intrigued with the idea of combining some of their mournful aspirations with something more serene. Composing began in May of 2009. I had decided to start fresh not using anything that I had already recorded. Preparing the music for the film, I knew that I needed to provide more built-in changes in the structure of the pieces to give George and Maryam more flexibility. As I worked, I purposely distanced myself from the more continuous architecture employed in my previous recordings in favor of several mini-suites. In the thinking about the music, I hoped that the pieces would do justice to the “gloriousness of the bees” theme, striving for a more overt hopeful quality. But old traditions die hard and the hopeful side of the music was eventually more subsumed by the lamentable.

I should also mention that if you have seen the film, this record will not contain all the music used and scored for this film.

I am incredibly honored to be a part of this project even if the final compositions turned out to be more appropriate for a different and more forlorn film. I know you have a lot to think about in this world but if you care about food or the world around us, you deserve to at least consider the arguments within this honest and real piece of film-making."
Brian McBride > Supposed Essay on the Piano [B major piano Adagietto] (from The Effective Disconnect, forthcoming on kranky) 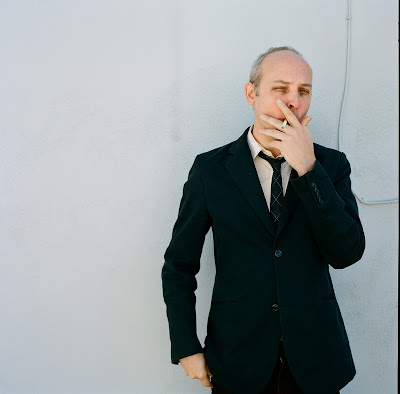 Important: LMYE only makes music available that artists/labels have chosen to share freely. Let us know if something here shouldn't be.
Posted by JL at 10:59 No comments: